Traditionally, we practice mouthpiece exercises sending out sounds and vibrations that because of their positioning and harmonic resistance have not similitude with the ones produced by the instrument. This is due to the levels of intraoral pressure generated by the difference in resistance between performing only with a mouthpiece and with the instrument. The aim of UPSOUND is reduce the deficiencies of the traditional method.

UpSound creates a natural resistance to the air flow, providing greater control of the air column, optimizing the vibration frequency and helping to study the projection in the musical performance for the brass wind players.

Similarly, UPSOUND stimulates the glottis opening as well as the connection to the upper resonators in the oral cavity. This allows the musician to study more accurately the articulation and tuning, getting a similar feeling to the one produced by instrumental performance. 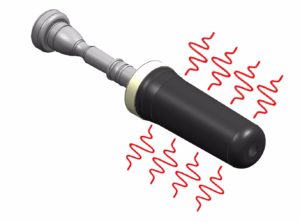 Besides, the UPSOUND soundboard transmits the vibrations (that used to be projected to the space within the room) through the hand and the arm until they reach the musician´s inner ear. This allows us to be aware of the outcome of the exercise carried out, being able to change the frequency and the placement of the air column applied to the mouthpiece at the same time.

We have different leadpipes depending on the instrument:

We have different colours: